Marketing Your Firm's Use of GPS for Logging Attempts

One of the questions we are often asked by users is how they can market their use of ServeManager to current and potential clients. Using the mobile app and logging attempts with GPS is a great selling point when it comes to accountability and compliance.

GPS adds another layer of proof that the attempt was made, not only protecting servers from motions to quash but also providing unprecedented transparency to clients.

Marketing Your Firm with the GPS Feature

While the benefits to the client are numerous, here are a few points you can highlight when discussing your services with clients.

For process servers who take advantage of these features for logging attempts, the key selling points to clients are transparency and accountability. You might remember these as one of our 7 Reasons Your Process Serving Firm Should Use ServeManager.

In this video, Jayne Rauser of Diversified Legal Services in Georgia and Delyne Nunez of Atlas Interstate Process Service in Texas share how GPS has been an added benefit to their businesses.

For more information on how the ServeManager mobile interface and GPS logging works, check out our video guide.

Comments From Other Process Servers

Alex Kamp of East End Process Service, LLC explained that he uses an app that logs the address and time of service because “a lot of servers don't do due diligence and just post. This proves you have [and], comes in handy if you have to testify.”

Randy Mucha of Firefly Legal also contributes to the discussion on GPS by stating that “Our software captures the GPS coordinates [...]. In addition, our mobile app utilizes the server’s cell phone camera/GPS to capture all of the metadata embedded with the image [...]. Years later, [...] when the case is contested in court we are able to produce an image with metadata coinciding with the attempt information on the sworn affidavit that supports the server’s testimony.“

Greg Urroz of Maricopa County Process Service, PLLC, stated “when you are using an app to document the GPS location, the coordinates are system-generated. That is one of the criteria for New York. This will probably become a standard nationwide at some point. We do it to offer a higher level of service and the clients really like it.”

Here's an example of what an accountability report looks like in ServeManager. 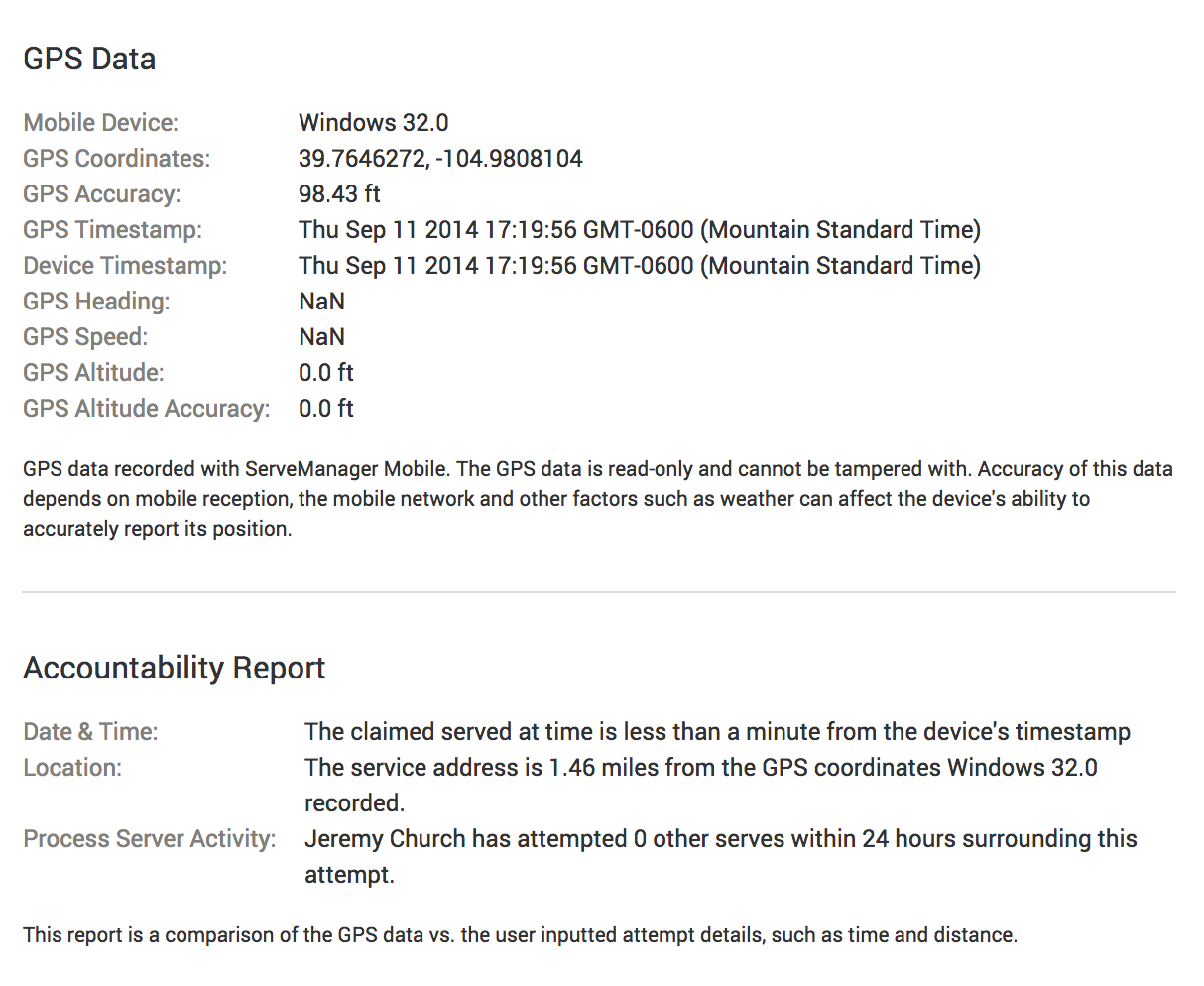 Process servers should consider implementing the technology to log GPS coordinates on their serves because it carries the benefit of keeping clients and courts happy, it provides an additional layer of security to help bolster the integrity of civil process servers, and it can help protect process servers in the event they are questioned in court.

If you are not already a ServeManager user, sign up for a Free Trial to get started.

Further Reading on Origins and Use of GPS in Process Serving

Today, civil process servers are taking advantage of logging GPS coordinates when they make service attempts. With the advent of easy-to-use cell phone apps, programs, and process serving software with these features built in, process servers can in one click capture GPS specific location coordinates at which a process server is attempting service is recorded — including the date and time.

Beyond just providing additional proof to the courts, logging GPS coordinates on service attempts also helps to protect the process server from fraudulent claims of bad service. In the event of a motion to quash, where process servers are forced to reaffirm their service attempts in court, sometimes several years later, logged GPS coordinates can serve as an additional source of documentation. When this is combined with pictures and/or video, detailed service notes, and/or defendant signatures and a process server who can accurately recall the service if questioned, many find that their service is upheld in court.

Origins of Logging Attempts with GPS

It wasn’t just changing technology that caused civil process servers to begin logging GPS coordinates when making service attempts, it was the need to provide additional proof to the courts that due diligent attempts to serve defendants were actually made.

Additional proof was needed as a direct result of the New York sewer service scandals in the late 2000s. These events defamed civil process servers and had a massive impact on the requirements of those in the civil process service industry. Essentially, process servers in New York infamously falsified service affidavits after neglecting to provide due diligent efforts or service attempts at all. This practice became widely known as “sewer service” (e.g. they threw the papers in the sewers of New York) has been the bane of the civil process service industry since the height of the scandal in the late 2000s. You can read more about these events in the 2009 article from the New York Times and in this 2009 press release from the New York Attorney General.

Subsequently, the courts needed to get more reliable confirmation that service attempts had been made. With the capabilities of GPS service, New York city moved to make logging GPS coordinates and storing this data in a third-party system a requirement, which was signed into law in July 2011. Storing the data with a third-party made a permanent record that could not be changed by process servers. While there are currently no statewide GPS regulations in place, it may be something that is required of process servers in the future— especially as many clients are requiring GPS logged service attempts from their civil process service providers.

From Scandal Savior to Value-Added Service

Although sewer service was isolated to some bad apples in New York, the events certainly shook the confidence of those working with civil process servers. Even civil process servers who had a long-standing record of superb service suffered the effects of the scandal as trust was shattered and increased regulations meant extra work, especially when it meant finding and purchasing software programs or apps that could handle logging the GPS data that is required in New York city.

Many servers are finding that logging GPS coordinates requires little additional effort as the technology does most of the work for process servers.

While GPS logging is not a legal requirement in California yet, I think the more servers and process server firms that use GPS logging, the better.

Outside of New York, many process servers have already moved toward implementing new technology into their business. We spoke with Process Server Joseph Click out of California who explained that “While GPS logging is not a legal requirement in California yet, I think the more servers and process server firms that use GPS logging, the better. Using such technology should increase transparency and reduce the instances of unscrupulous servers engaging in "gutter service" which gives the entire industry a black eye. I think laws will be coming down nationwide to require logging coordinates during service attempts so being an early adopter of such technology will certainly pay dividends in the future.”

Joseph Click further outlined the advantage of GPS and other features in an article titled How Using ServeManager Makes Me Money.

For more information on the origins of GPS use in process serving, read Many Process Servers Now Voluntarily Use GPS To Log Service Attempts.