Jillian Newkirk of Evolution Process Service, LLC shares how she got into process serving and her experience using ServeManager.

Nothing like quitting your boring, corporate desk job on a Sunday night and starting a new business on Monday.

ServeManager is a great tool that is easy to learn and integrates with other applications (such as Quickbooks).

I was working for a large company entering orders, answering phones, etc. and I hated my job. It was tedious. It was redundant. I was bored. I hated Sunday nights because I knew the next day I was going to have to return to my own private cubicle hell and start all over.

Sitting on the back porch drinking an adult beverage with my now wife, Chris, she suggested I quit. She knew I was miserable and frankly, she was probably tired of hearing me cry and whine all the time.

Chris had been running a part time business as a process server while working for the same large, boring corporation as I was. She told me that she would train me to be a process server and let me take over some of her clients. So I did. It started off slow, but I persevered. I built myself a website. I watch videos on SEO. Soon I was building my client base, 1 attorney at a time. Then one day, I got a call from the state of Indiana. They were doing a little research on possibly using process servers to try and serve court documents to parents involved in Child Services cases. The woman and I talked for an hour. We bonded and I told her we (meaning just me!) could do the job. She told me she would get back to me.

ServeManager has eliminated the constant phone calls, emails, and texts about what jobs they had coming to them. With ServeManager, the job is entered under their name and an email is sent directly to them.

I waited. And waited. And waited. Nothing moves fast in the state government. Finally, 3 months later I got a call saying that they were opening up a RFP for process serving for DCS (Dept of Child Services) cases. I submitted my bid and I waited. And waited. And waited again. Finally, a few months later I was notified that I had won the bid. I was taking on my home county and 12 additional counties in the same general vicinity. Chris helped me out and we were able to handle those few counties, very well, I might add. So well, that the state then came back to us and said they wanted us to do process serving in all 92 Indiana counties (This is on top of the several other law offices and process serving companies we were also doing jobs for by this time). We said yes. We hired 6 servers to help handle different areas. We drove thousands of miles to deliver documents ourselves.

We went from 30 serves with ServeManager a month to 60 serves a month to 200 serves a month and just recently signed up for the 1000 jobs a month membership in a little over a year. We are now averaging over 600 to 800+ jobs per month and it just keeps increasing. We have always had subcontractors that work for us, but just this week hired our first full-time employee and a part-timer. 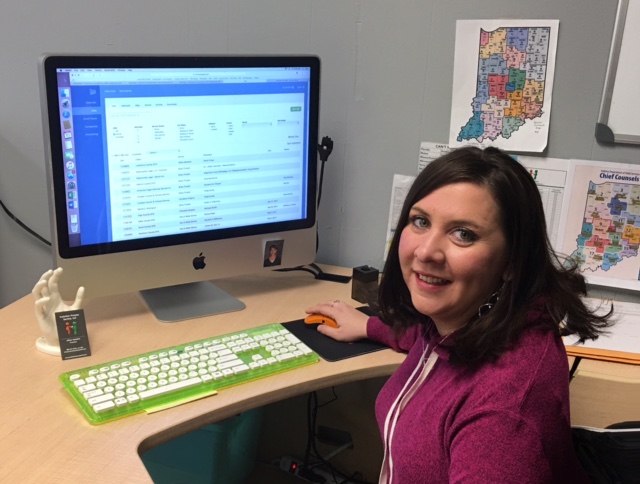 How long did it take to adapt to using ServeManager?

It only took about a week to adapt.

What were some of the main problems ServeManager helped you solve?

ServeManager better helped us organize not only incoming jobs, but outgoing jobs, and helped us with billing and assigning jobs to servers. It made things more simple so we were all able to be more efficient. ServeManager is a great tool that is easy to learn and integrates with other applications (such as Quickbooks).

How has ServeManager changed the way you collaborate with other process servers?

ServeManager has eliminated the constant phone calls, emails, and texts about what jobs they had coming to them. With ServeManager, the job is entered under their name and an email is sent directly to them. They can then go in their job and know exactly where they are going. By using the directory, we have been able to find other companies to hire for jobs that are not local.

What are some of the biggest benefits ServeManager brings to your customers?

ServeManager allows the client to pay the invoice online and for the affidavits to be sent in real time (if they accept electronic signatures). It also allows us to be able to share any status updates in real time.